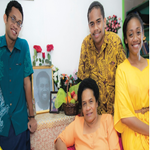 Sitting in her living room with family portraits of her late husband behind her, Seleima Veisamasama is the picture of a calm and confident woman despite the turmoil that she has experienced over the past year, and particularly in the last few months since the passing of her husband.

“Life is full of things that are unexpected and if we are to live well, we must always be prepared for the unexpected. I’m saying this because I am experiencing it. One year ago I never thought that I would be a widow today,” she says quietly but firmly.

“A year ago, we were still talking about our plans, about our children going to work and how we were going to travel and things like that. Then at the beginning of last year, he started losing his eyesight. By August, the percentage of vision that he had left was quite low. We didn’t know it was going to dwindle down so fast and that we were going to be left like this. It all happened so quickly.”

In June, Seleima lost her husband Mala to diabetes, which he succumbed to after a year of deterioration.

His medical condition had forced him to retire early from his work as a journalist and the unexpected event meant the family had to start making ends meet on Seleima’s pay packet alone.

That wasn’t easy with four of their five children still in school – two at tertiary level and two in high school.  Seleima and Mala were also guardians to children from Mala’s village in Macuata, Vanua Levu, who stay with them while they are in Suva to study.

It was tough, Seleima recalls, especially in the months leading up to his passing when the reality of the situation hit home and she began to worry about how she was going to handle the bills, provide for their daily sustenance, and pay for the house and the children’s education.

Their saving grace, which helped ease this harsh predicament, came in the form of an insurance policy that Mala had taken out in 1994, just four years after he was married.

“It was really bad and there were times when I’d be in tears just because I thought there was no safety net for me apart from FNPF…and how could I cope…,” the soft spoken high school teacher recalled.

“Then this insurance policy came right out of the blue. It was there all the time. I just didn’t know how much it could do or how much was there. It was like a gold mine that I didn’t know about.”

Seleima’s experience is not unlike many in Fiji who have lost a partner and significant bread winner in the family.

An alarming reality is that many families in Fiji prematurely lose a parent or both parents to Non-Communicable Diseases (NCDs) while children are still young.

Fiji, according to the Ministry of Health, is struggling with an NCD crisis and it has become “the biggest killer”, causing around 80 percent of deaths in the country each year.

A leading local life insurance company, in one of its presentations on the importance of taking out life insurance, noted that in 2015 alone it paid out over $7.39 million accounting for 373 death claims. An overwhelming 200 of those claims were for clients below the age of 54 and major killers were heart related diseases.

No doubt some of these families would have FNPF pensions to fall back on. But are they enough in the long run?

At the current pension rate, a member would need to have at least $120,000 in FNPF funds just to live at the poverty line, if that member chooses the individual pension option.

Workers are always advised to hold other forms of savings and investments to help supplement their FNPF pension when they retire or when an unplanned event such as death, disability or unemployment befalls them.

Insurance, used either to pay out in the event of a death or a disability, or used as a savings plan with insurance cover included, has low awareness amongst the public and the benefits are often not understood or considered. Until it touches our lives in very personal ways.

For Seleima Veisamasama, she could never have imagined the significance and usefulness of Mala’s decision to take out that insurance policy in 1994.
With an affordable premium of just $24 a fortnight, the monies that were paid out were more than enough to cover her husband’s funeral expenses and the associated costs.

Months have gone by since Mala passed on and the grief of his absence still lingers in the Veisamasama household. But among the things that the experience has taught them is a new appreciation of the importance of having an insurance policy for when unexpected things happen…and for when the inevitable occurs.

Seleima thoughtfully shares some lessons she has learned: “I would give this message to fathers – if you are the only bread winner in the house, think of your wife and children. Please have a safety net for them. Just consider what would happen to them if your wife is a home maker and she may not have the skills or the time to go out and immediately find work. For those who have just started out in life, with your children still little and you are working, take out insurance as I’m sure it will protect you and your family. Mothers, if you are working, take out insurance for yourself and for your children’s sake. You never know what can happen as unpredictable events have a way of just coming without particularly selecting anyone. They can happen to the best of us. There is a day when they will knock on your door and hopefully when that day comes, the one sure thing you’ll have is a life insurance cover.”