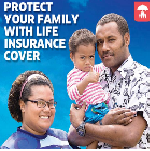 School-teacher Eparama Rauraumala, 29, almost decided to surrender his insurance policy when he ran into financial difficulties – holding on to the policy proved to be a wise decision.

As a fresh graduate in 2009, Wainunu native Eparama Rauraumala did not have a lot of financial obligations. So the following year in 2010, after a chance meeting with an insurance agent at an aunt’s place in Lautoka, Eparama bought an insurance policy under his father’s name. Every fortnight, he’d pay a premium or cost of $45. He saw it both as a way to save and as a form of protection. As the eldest in the family, he was able to look after his parents and his four siblings as his teaching career flourished. Life was good.

Four years on, Eparama got married and started a family of his own. He continued to support his younger siblings and continued to pay premiums on his father’s policy despite the mounting financial obligations.

However, as his family grew, meeting his obligations every fortnight became a struggle. Eparama and his wife drew up a budget of their income and expenses, but despite their efforts to stay within target, there were always ‘unexpected events’ that forced them to spend more money that they had planned to so they looked for ways to make economies and to balance the household budget.

It became a regular problem every fortnight when the insurance payments were due, and desperation set in. Eparama considered cancelling, or “surrendering” his insurance policy to get some temporary relief from what he saw as the increasingly painful salary deductions that he was making.

In May this year Eparama finally made up his mind and set off from his home in Waiqanake, outside Lami, for the capital city. He had been paying $45 a fortnight for over six years.

“I can still remember the date. It was the 26th of May 2016. I went to the insurance company and asked to surrender the policy because I wanted to stop the withdrawals from my salary,” he said.

“However when I was in the insurers office, a helpful employee there advised me not to surrender the policy, but instead, to take a “payment holiday”. This stops the payments for up to three months and during that time, the policy stays in force and the insurance cover is still there. So I took that advice and I filled in a form to temporarily stop the deductions – that gave me time to recover.”

Eparama didn’t know it at the time, but his decision to hold on to his insurance policy proved to be one of the best decisions of his life.

Four days after meeting with his insurance company and deciding to keep the insurance policy, , Eparama received sad news from his village in Wainunu, Bua in Vanua Levu.

“I received a call from my brother at the village informing me that my father had passed away. He had gone to the village to visit my only sister who had just started her teaching career.” Recounted Eparama.

News of his father’s death came as a shock because only hours earlier he had been speaking with his father and mother by phone. “He was in good spirits and was joking to my mother over the phone. He seemed fine and was also physically fit. What a shock I had when I later received the bad news. One of the first things that came to my mind when that news came was the insurance policy that I had planned to surrender four days earlier.”

On the 31st of May Eparama set off again for the capital city to meet with his insurance provider, this time to relay the news of his father’s death, who was the policy holder.

“The insurance company was a great help. When I compared what I paid in terms of premium against what they gave me, it was a very large amount and a huge gain for me. That money really helped when I needed it.”

Three weeks later the insurance company came back to me with the rest of the money from the policy along with some added bonuses. I shared the money with my mum and my brothers and sisters, as well as with members of my father’s family.”

Eparama was also able to save money for his children’s education and invest some of the funds with the Unit Trust of Fiji.

The experience changed Eparama’s view about insurance. He has since bought another insurance policy and does not intend to surrender it before its end date – the maturity date.

“I would encourage everyone, especially youths to take up insurance because we do not know what will happen next in our life,” he says.

Eparama’s advice is timely. Its estimated that only 12 per cent of Fiji’s population are covered by some type of insurance and so many remain vulnerable to a range of unexpected risks that can change their lives for the worse, leaving them and their families with a huge financial burden.

Many people are unaware of the benefits and the positive impacts an insurance policy can bring, and how it can help them. It’s advisable to get insured at a young age, as soon as one starts work as the insurance is cheaper to buy, and like Eparama, it can help to set you up for a secure financial future.