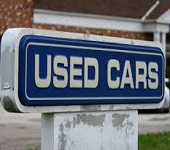 Some people seem to get a new car every year or so. What happens to all the ones they’ve sold after just a year? People buy them and sometimes get great deals.

A large part of a car’s depreciation happens as soon as you drive it out of the dealership. So the main advantage of buying a used car is that you’re buying after this huge drop in price. That makes a used car less of a long-term investment.

Shopping for a Used Car
Used car salesmen have one of the worst reputations of any profession. While most will not live down to this reputation, some will. You’ve heard the term “too good to be true.” It applies double to used cars. That motto will help you avoid some of the car sharks.

Shopping for a used car can be much harder than shopping for a new one. They’re like snowflakes. Each one is unique. That makes comparison shopping more of an art than a science. And dealers have a little bit of an advantage since you can’t just leave and buy the exact same car at another dealership.

There are three main sources of used cars:

Used Car Dealer Dealers often offer you a warranty on a used car – which is comforting if a previous owner has driven it hard. But you probably won’t get as good a price as you will if you buy directly from the owner of the car.

Buying direct
A little negotiation can really drop the price to something that’s fair to both of you. But you won’t get a warranty. And to look at five cars, you’re most likely going to have to visit five different people.

Public Auctions
You can get some incredible deals at public auctions. There is no dealer to bargain with and only other potential buyers will increase the price. The downside to these auctions is that you usually can’t test drive the car and it is extremely rare to get a warranty on an auctioned car.

Research is Important
The point of buying a used car is to save money. But if you don’t research the car you buy, it could end up costing you more than a new car. Look at online car sites to work out the value of the car so you know what price range to start in. Then get the history of the car. Ask the seller what it was used for. If it has been used just for driving on relaxing tours of the countryside several times a year, no problem. But if it was used as an off-road race vehicle, you might want to reconsider.

When the time comes for the test drive, be persistent/harsh and thorough. Ask the seller about any strange noise the car makes. Use everything in the car. Press every button. Open every window. Open and close every door. Once you are sure there is nothing wrong with the car, get a professional mechanic to do the same. Subtract any small thing wrong with the car from the price you are willing to pay for the vehicle. Realistically, you’ll end up paying that money back to get it fixed.