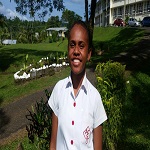 What started as a means to pay for her cheerleading uniform has blossomed into a thriving little business for the Year 11 Pure Science student from Tailevu.

What’s more, Veronica is managing to save and bank a chunk of the proceeds she makes from selling homemade chocolate balls to fellow students and teachers. But that’s not all. Veronica’s entrepreneurial activities have had a flow-on effect at home, inspiring better spending and saving habits for the whole family.

Veronica credits the Financial Education she’s received in her Year 9 and 10 Commercial Studies classes for kick-starting her interest in business, saving and investing.

Through a series of practical activities, which culminated in opening a bank account, Veronica and her peers were encouraged to save and invest. But Veronica didn’t stop there. When faced with the task of buying costly outfits for her cheerleading group, rather than ask her parents for money, she decided to raise the funds on her own.

“I didn’t want to burden my parents so I decided to start my own business,” says Veronica.

“I was able to pay for my cheerleading expenses and my parents were happy too because I was independent.”

That sparked something in her and she continued to make and sell the chocolate balls. Veronica started doing so well with her small business that she stopped asking her parents for pocket money altogether.

On average, she spends about $30 every month on ingredients and doubles or triples that amount with her sales. She has also diversified her offerings by buying and reselling “choki choki”, the soft chocolate spread snack sold in plastic tubes.

After her cheerleading expenses, Veronica managed to save $350 in May. Of this amount, she used $245 towards a new mobile phone and $35 towards ingredients, leaving her with $70 in savings.

However, because of a recent injury and impending exams, she has not been able to focus on her business. But Veronica is recovering well and is excited to get back into business.

Since 2013, students all over Fiji have been learning about personal money management and investment through a Financial Education (FinEd) program, which has been integrated into the Fiji school curriculum. The main goal of FinEd is financial competency, not just knowledge generation but behavioural change, which Veronica and her peers (as well as their families) are beginning to demonstrate.

Studies conducted on financial competency between 2004 and 2012, have found strong links between financial competence and household wellbeing. They also found that of all the various ethnic groups in Fiji, iTaukei in particular struggle with managing their money.

However, children like Veronica have the ability to change this status quo and are demonstrating that this change is slowly beginning to happen.

Veronica’s mother, Laniana Tawake, is the vice principal at Adi Cakobau School. She’s been inspired to better manage the family’s finances from the change she’s seen in her daughter. She also uses Veronica as an example to motivate her younger daughter to manage her daily allowance and save.

“Financial Education has had a tremendous impact on Veronica and that has also made an impact on our family’s spending and budget,” she says. With Veronica keeping a watchful eye when they go shopping for groceries, Laniana has been able to curb her impulse buying. She and her retired school teacher husband now set a weekly budget and put money aside towards the girls’ education. The couple does cattle farming in Ra, which helps pay for unforeseen expenses and functions.

Laniana has the added advantage of seeing the benefits of Financial Education being taught in Fiji schools from both parent and teacher perspectives.

“It’s really effective to implement Financial Education in schools because it trickles down to families,” she says. “We understand how to handle money a lot better and by implementing it in our families and our daily lives, we can really see the change.”

FinEd is an initiative under the Pacific Financial Inclusion Program with funding from the Australian Government, a regional effort helping low-income households gain access to sustainable financial services and to empower consumers through Financial Education. In Fiji, FinEd is led by the Reserve Bank of Fiji and implemented by the Ministry of Education which believes that through improved financial competency, young women and men will leave school with the necessary skills, knowledge and behaviours to enable them to interact confidently with the financial economy and to contribute positively to their families, the community and the country.