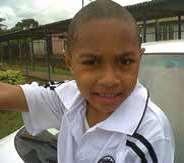 Welcome to the Reserve Bank of Fiji’s Public Awareness column. This article continues the series of articles on financial education in Fiji and how it contributes to financial inclusion.

EIGHT-YEAR-OLD Paul Caginivalu, a Year 3 student at Assemblies of God Primary School in Nasinu, started collecting his savings in money boxes while in kindergarten. Two years ago, Paul used his savings to open an account with Unit Trust of Fiji (UTOF), a government-owned investment company. Today, he is the proud owner of 1161 units. Paul says he wanted to put his money into units because they’re a safe place to put money and to watch it grow. He has asked to have the income he earns from the units, called dividends, to be reinvested regularly with his main savings.

UTOF has a Children Investment Plan (CIP), which allows school children under 18 years old to buy units at a fixed value of $1 per unit with a minimum investment of 20 units. These units are placed in the Trust’s Income Investment Fund earning income through capital investments in domestic companies in a variety of sectors. Investments are held in trust until the child turns 18. In July 2016, there were a total of 3228 school children enrolled in the plan, with the highest amount invested being approximately $10,000. In 2015, UTOF paid out an annual return on the CIP of 3.28 per cent in tax free dividends.

The Australian government funded Financial Education (FinEd) program has been teaching primary and secondary school students in Fiji how to better manage their money and invest since 2013. Its aim is to produce more financially competent individuals.

Rather than be taught as a stand alone subject, Financial Education has been integrated into existing school subjects (ensuring long term uptake) and taught over consecutive years at both primary and secondary school level.

FinEd is taught in English, Mathematics, Social Studies, Commercial Studies, Accounting and Economics. Students learn about the various investment options available to them such as those offered by commercial banks and insurance companies as well as the UTOF and the country’s mandatory superannuation fund, the Fiji National Provident Fund (FNPF).

Thanks to FinEd, Paul has learned the value of money, the importance of saving and how to differentiate between needs and wants through a series of interactive classroom activities in Years 1, 2 and now 3. For example, a Year 2 activity titled “Sharing is Caring” had Paul and his classmates making celebratory cards from materials they purchased from a mock classroom store using their classroom specimen currency. Their teacher also lent them some of the materials to make the cards. Through this exercise, they learned to distinguish between borrowing and owning, explored how money decisions have consequences and looked at the relationship between withdrawing money from and saving money with the bank. They also learned about financial risks by learning how to keep money safe.

In Year 3, Paul has learnt more about financial planning for the longer term through a classroom activity where students were required to organise a cultural art and craft festival. As part of their planning, the students prepared a budget, which they later compared with the actual spending during the festival and analysed the financial risks involved. Through activities such as this, Paul has learned how to set medium and long-term goals.

While only eight years old, Paul says that studies after high school will be expensive and so he needs to start saving now towards his tertiary studies. He is also thinking about what he wants to be when he grows up and he is thinking of the type of lifestyle he would like to have. Paul thinks that maybe a doctor might be an interesting career to pursue as the type of work would be exciting and as he says, “The pay should be good too!”

Paul’s savings and investment behaviour has become a shining example for his relatives. Paul’s older brother has already started working and after watching Paul saving regularly and seeing his younger brother invest his money, he too is planning to start investing in units. Today, Paul’s five primary school-age cousins who have been watching Paul saving over the past three years, now have a moneybox each and they are all trying to spend wisely and save too.

FinEd is an initiative under the Pacific Financial Inclusion Programme, a regional effort helping low-income households gain access to sustainable financial services and to empower consumers through Financial Education. In Fiji, FinEd program is led by the Reserve Bank and implemented by the Ministry of Education, who believe that through improved financial competency, young women and men will leave school with the necessary skills, knowledge and behaviour to enable them to interact confidently with the financial economy and to contribute positively to their families, the community and the country.